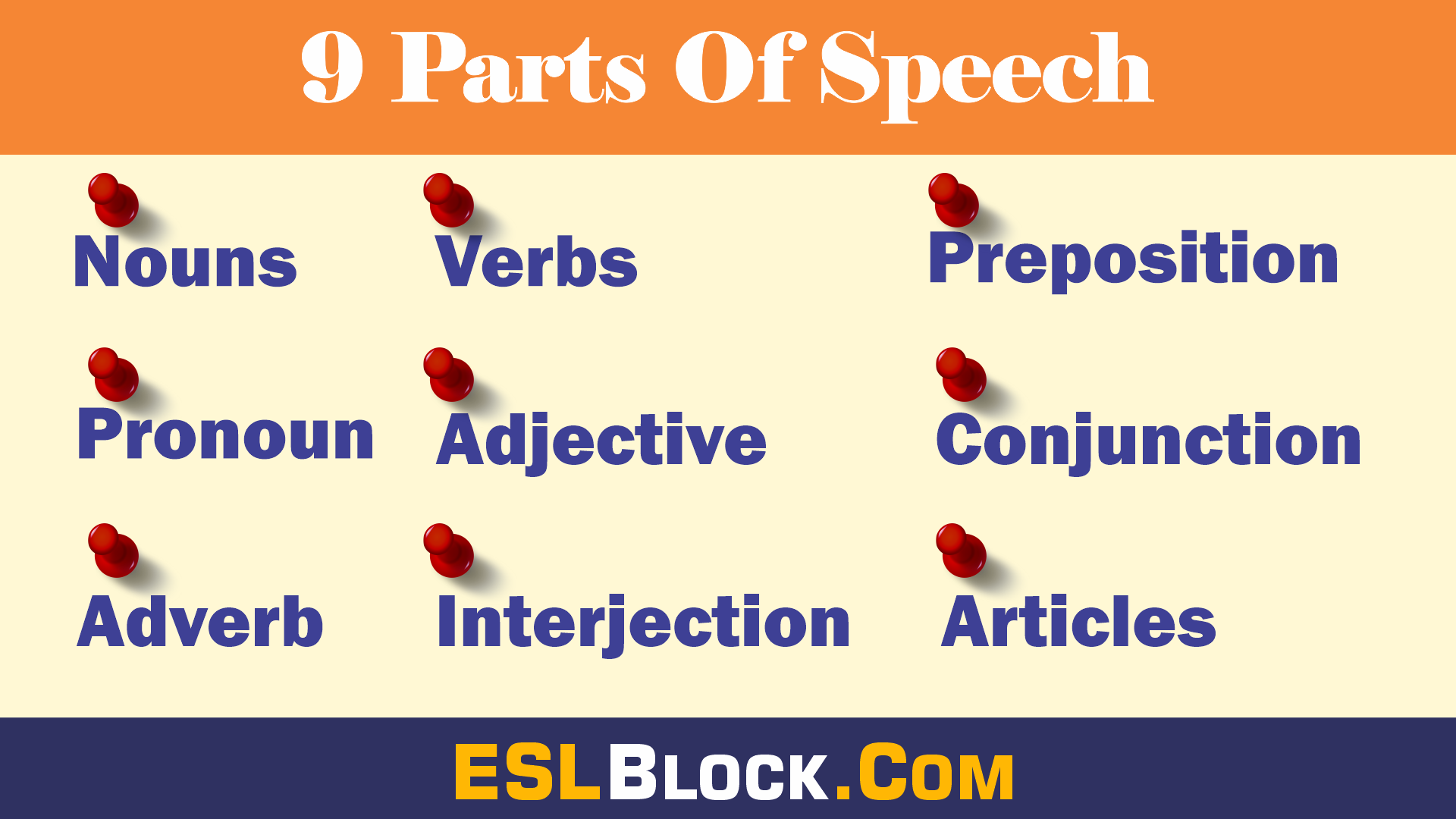 Some grammar sources classify English into 8 parts of speech. Some sources say that there are 9. Here at ESLBlock.com, we explain the most recent categorization system as 10 parts of speech.

We can classify English words into ten types referred to as “parts of speech” or “word classes.” It’s crucial to know the different parts of speech. This allows you to analyze sentences and comprehend the meaning behind them. It also assists you in making excellent sentences.

Every word is part of speech. The phrase “part of speech” refers to the function a word plays in sentences. Like every other show or workplace with an ensemble cast, the roles were designed to be interconnected.

Within the English language, there are many parts of speech that are arranged to create sentences. Without these elements, the language wouldn’t be able to work.

Learn more about the different parts of speech, the words we use each day, and how to convey ideas effectively.

What Are Parts Of Speech?

The parts of speech comprise categories determined by the role they play in sentence structure. The word categories are arranged according to their function in grammatical terms and the meanings they create and communicate.

Within the English language, there are about ten common speech parts. They include nouns, verbs, adjectives, adverbs, prepositions, articles, conjunctions, interjections, determiners, and pronouns.

Although the meanings of these categories will be explained in the following sections, remember that these words are grammatically relevant or perform as grammatical elements in the speech, including sentence structure and meaning.

In linguistics, we distinguish lexemes and words. Words are an everyday word that is used by all of us every day. For example, every one of us will be able to agree on the number of words that appear in this sentence:

When we examine the situation more closely at the details, we can see that ran and running are derived from run, which is the exact verb. Both words are variations from the same word. The run is lexeme which is a simple version of the term.

Explanation of Different Parts of Speech (with Examples)

This chapter will look a bit more closely at the various components of speech like the verb, noun, and adjective. This will enable us to understand better how sentences are constructed and how all the parts of speech function.

We can define a noun as, a noun which is a word that names person, place, object or concept. In general, anything that names a “thing” is a noun regardless of whether it’s a basketball court in San Francisco, Cleopatra, or self-preservation. There are many different subcategories of nouns, such as the proper noun collective noun, the possessive noun, and the common noun. Each has a distinct function, so let’s examine this in greater detail.

Common nouns are the simplest form of nouns. Common nouns are words of naming that are commonly used by objects, people, and animals. Common nouns don’t refer to any specific individual, location or thing. They are general terms. Therefore, they cannot be capitalized unless they are used to begin an entire sentence. For instance, girl, boy doctor, town, city dog, car and others.

Names of people or places such as your name, your sister’s name, your mother parents.

Collective nouns are used to name a group of persons, places, animals or things. For example, a flock of sheep, a swarm of bees and a team of players.

A possessive noun refers to a word that identifies who or what owns something. We can add an apostrophe (‘s) to make most singular nouns possessive form.

Verbs are words used to describe what happens (action) in the sentence. They can also show a sentence subject’s state of being (is, was). Verbs alter their form depending on the tense (present or past) and the distinction between count (singular and plural).

A verb is a necessary part of a sentence and is known as the soul of the English language. Following are the various kinds of verbs.

A pronoun is a word used in place of a noun. The noun substituted by a pronoun can be known as an antecedent. For example, in the sentence, I love my bunny because he is a good boy, the word he in the sentence is a pronoun that replaces the noun bunny.

In grammatical terms, pronouns behave like nouns. They can be used for subjects and objects; They refer to persons, places, and things; they can be plural or singular.

There are many kinds of pronouns we can use in our writing and speech. First, we will briefly discuss the various types. Then, if you’d like to look into each of them in greater depth, we’ve provided comprehensive information on each of the pronouns.

Here, we will briefly look at 13 different types of adjectives. If you’d like to know more about each adjective more in-depth You can go through our entire guide to the various kinds of adjectives!

An adverb is used to describe or further explain an adjective, verb, or another adverb but never a noun. They can add more information to a sentence making it more transparent and more accessible for the listener to imagine what is being described in detail. Adverbs will often end in the letters -ly, but there are exceptions to this rule, such as the words very and never.

Adverbs specify when, where, how, and why something happened and to what extent or how often.

Prepositions are a common word. Seven of them are among the top 20 most used words in English. Prepositions connect a word with other parts of the sentence. They explain the connection is, e.g. in time or space.

A preposition is used in English to establish a relationship between two phrases or words. Words like in, prior, to, on at, in between, before, on, at etc., are examples of prepositions.

Conjunctions are words used to connect words, phrases, and clauses. There are many different conjunctions within the English language. However, some commonly used ones include and or, but for, if, and when.

Whether, and, however, still, or, so, after, yet, since, before, either, neither, because, unless, as, because, but, for, just as, nor, not only.

Many different kinds of conjunctions can perform various tasks within sentence structures. This includes:

An interjection is defined as “An interjection or exclamation is a word used to express a particular emotion or sentiment on the part of the speaker.”

You can use a verb, a noun, or an adverb as an interjection.

Determiners and articles act as adjectives by changing nouns, but they differ from adjectives because they are required for sentences to have the correct syntax.

Articles and determiners are two parts of speech used alongside noun phrases or nouns to help clarify their meaning.

Certain grammars of the past have considered the article as a distinct component of speech. However, modern grammars generally include articles in the class that are determiners that define or quantify a word.

In the English language, there are eight parts of speech. Each one has its use. Without them, we’d not be able to form coherent sentences, so it is essential to be aware of the different functions each one serves. In these infographics, we’ll examine each of the different speech parts and what they are utilized for, as well as some illustrations of ways they are used in the context of a sentence.

Make use of these parts of the speech quiz to test your English Grammar skills or your students. Answers are listed at the end of the page. Have fun!

You can take this grammar test online as well as print it on paper. It will test what you have learned from the Parts of Speech page.

22 thoughts on “Parts of Speech: English Grammar Guide with Examples”