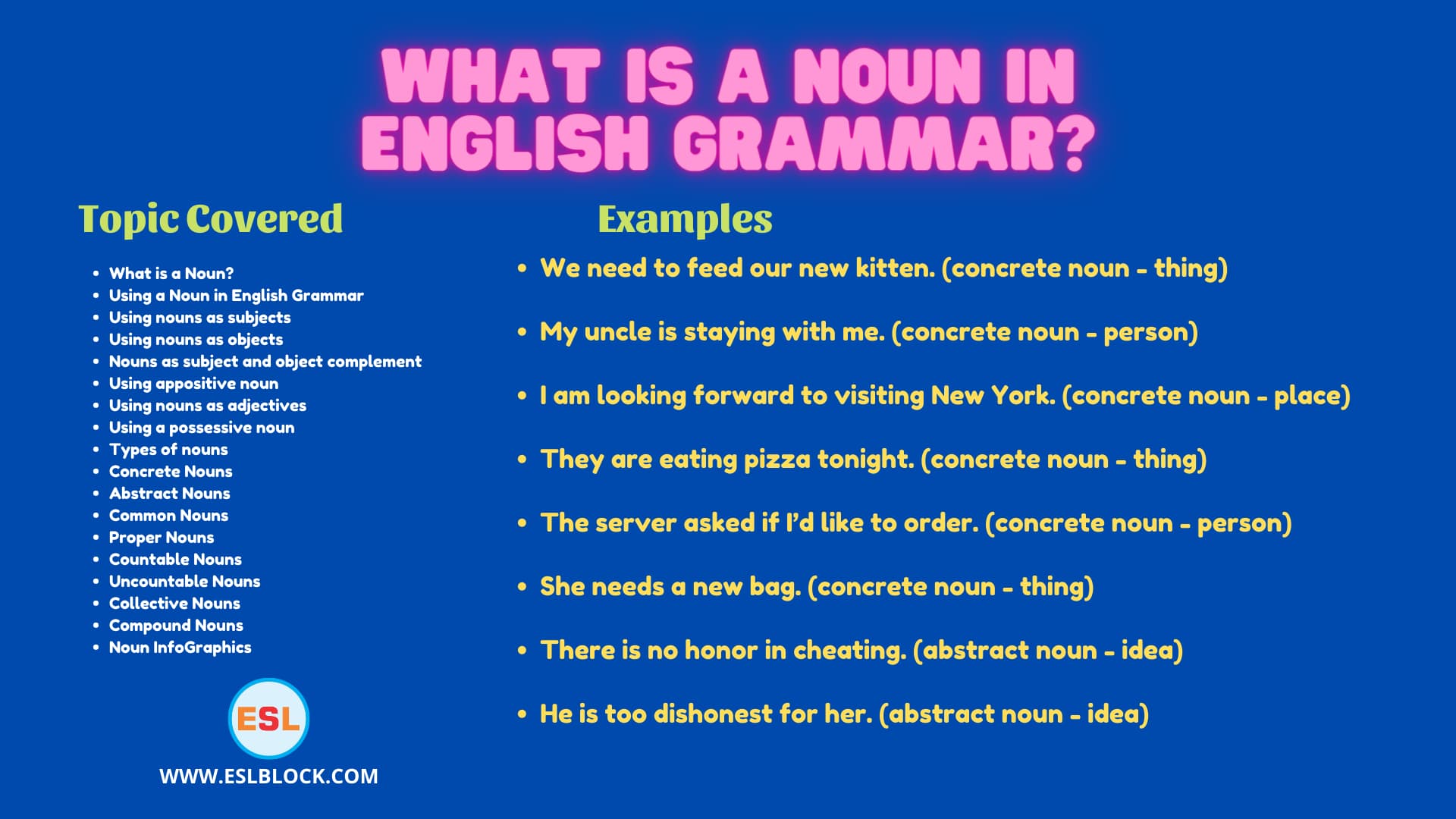 What is a Noun in English Grammar? We’ll explain the meaning of a noun, how to use nouns, types of nouns, and provide a variety of examples of nouns in English. When you’re learning English grammar, you’ve to deal with the noun. But what exactly is it? And what do nouns do in a sentence? In this article, we will look deeper into the definition of a noun, how it can be used, and the rules that govern its use. Additionally, we will look at some examples to better understand the purpose of nouns.

As a guide, the below definitions and tables provide the fundamental use of the noun. Read on to get a more in-depth explanation of the rules and examples of when and how to use a noun.

Learn to use nouns with example sentences and ESLBLOCK worksheets for printing.

Nouns are all over our writing. But what are the types of nouns you face, and how do you use them? To understand the meaning of a noun one of the easiest explanations is that it is a word used for the person, object, place, idea, event, quality, quantity, and substance. Nouns are the most common words used in English. Nouns are one of the nine parts of speech.

Some example sentences of nouns;

The noun is a radically different part of speech from an adverb, pronoun, preposition, conjunction, interjunction, noun, adjective, and the rest.

Using a Noun in English Grammar

Following are ways you can use nouns in English Grammar.

Every sentence needs to include a subject, and the subject is always a noun. The subject of a sentence can be the person, place, or thing.

Sofia is the subject of this sentence.

Nouns may also be an object of a verb in the sentence. An object can be a direct or indirect object. Let’s take a look at some examples of nouns as objects.

In these examples, the words her and sister are both nouns being used as the object in the sentence.

Nouns as subject and object complement

Amelia is a doctor.

The noun will come after another noun as a way of explaining it further when serving as an appositive noun.

My brother, Oliver, is a singer.

The noun Oliver is the appositive noun as it gives us further information on the first noun, brother.

A noun may also be used as an adjective in sentences.

The house has a light kitchen.

The word light has been used as an adjective in the above example.

An apostrophe should be used when a noun is used to denote possession of something.

These are the kitten’s things.

Nouns can name a person:

Nouns can name a place:

Nouns can name a thing:

Here is a list of some abstract noun examples.

Nouns have a large proportion of English vocabulary and they come in a lot of types. These include:

A concrete noun is a person, place, or thing that we observe in our lives. Nouns that we see, hear, taste, smell, or touch are related to this type of noun. There are further two types of concrete nouns, common nouns, and proper nouns.

In the above examples, dog, school, and cookies can be touched, are concrete nouns. Here is a list of some concrete noun examples.

The common or generic noun is the name of a regular thing, place, or person. Common nouns are not capitalized the first letter.

A Proper Noun is a very specific, very particular person, place, or thing. proper nouns are capitalized their first letter.

In the above examples, love and honesty cannot be touched, are abstract nouns.

A countable noun is a noun that can be counted. Countable nouns can be used with the, a/an, any, some, a few, many, etc.

Cat is singular and countable.

Dogs are plural and countable.

An uncountable noun is a noun that is impossible to count; liquids are uncountable, as are things that act like liquids (sand, air). They are always singular and can be used with any, some, a little, and much.

In the above examples, intelligence and water are not specified, and both are uncountable.

Collective Nouns are a group of persons, animals, and things. Generally, collective nouns are used as singular.

Benjamin saw a flock of sheep.

A compound noun is a noun made up of two or more words.

Amelia has a boyfriend.

With this set of activities and explanations, you will quickly determine whether you are making the most effective use of the noun and how they could be used to enhance English writings.

Since the nouns are the main part of English Grammar, the importance of developing English learning skills cannot be undervalued without nouns.

You can read the above sample sentences about nouns to improve your understanding of English grammar.

Encourage your children to learn these basic but commonly used nouns, by following the simple example sentences given above. Then, save this list of noun sentences, handy for your kids in future.

With ESLBLOCK, you will not face problems studying new ideas. If you are in doubt, the qualities of blog post about What is a noun, reach us through our blog’s comment section. Keep checking back! We’ll attempt to give you feedback as early as possible. Thank you!