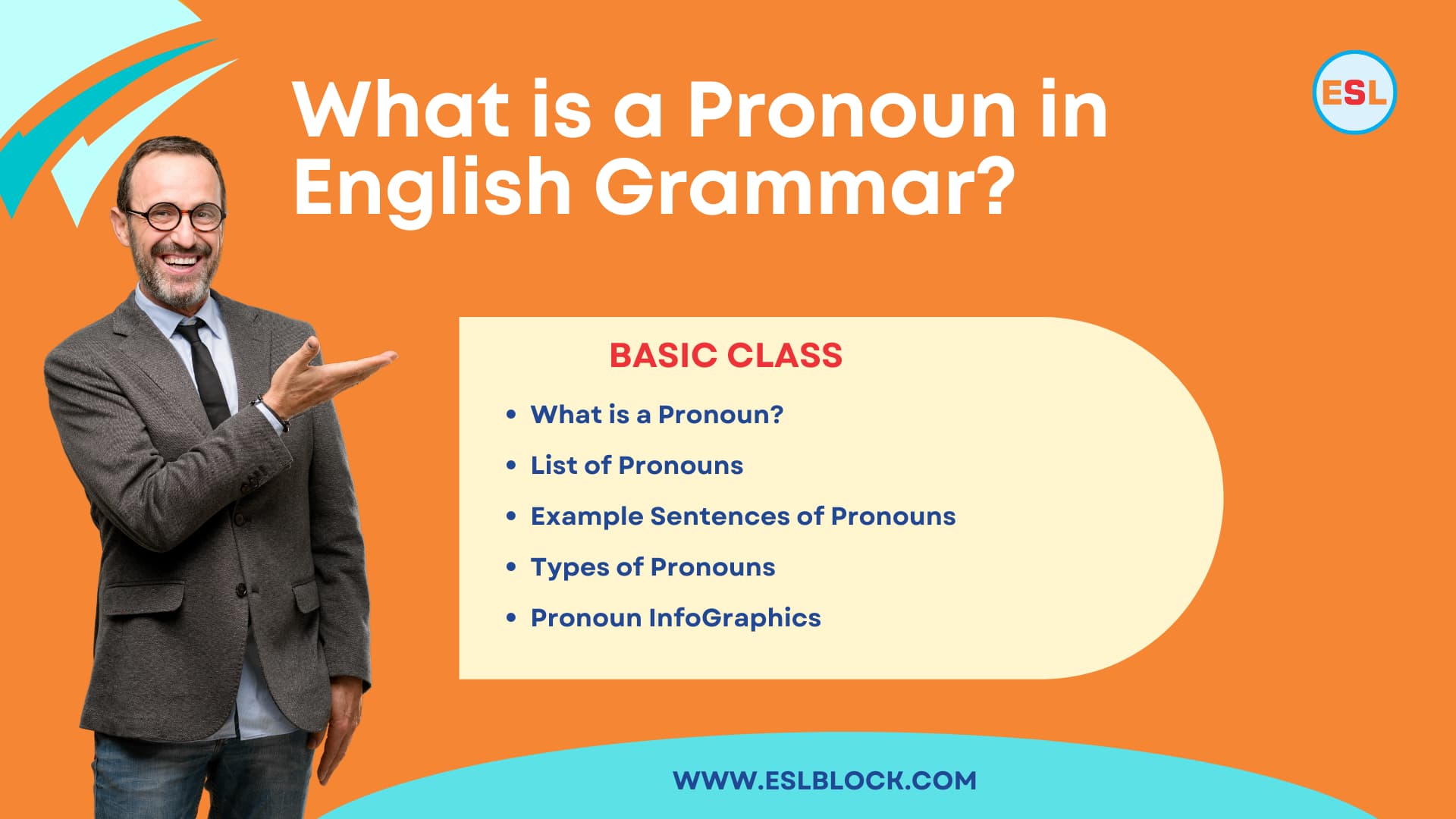 What is a Pronoun in English Grammar? If you’re oriented with English spoken language or the general language, you’ve probably heard of Pronoun. A pronoun is a word that replaces a noun or noun phrase. What are pronouns? How do you use them in English writing? This article will discuss the meaning of pronouns, the appropriate times to use them, and practice sentences of pronouns.

As a guide, the below definitions and tables provide the fundamental use of the pronoun. Read on to get a more in-depth explanation of the rules and examples of when and how to use a pronoun.

Learn to use pronoun with example sentences and ESLBLOCK worksheets for printing.

What is a Pronoun?

Pronouns are short words that are used to replace a noun or a noun phrase. Pronouns are either the noun previously mentioned or the noun that does not require naming specifically. Pronouns are one of the nine parts of speech.

The most commonly used pronouns are personal pronouns. They are used to describe the person or persons who write or speak (first person) and the persons who are being addressed (second person) or any other person as well as objects (third person). Like nouns, the personal pronouns may function as either the verb’s subject as the subject of verbs or the object of a verb or preposition.

Pronoun is a radically different part of speech from a verb, noun, conjunction, adjective, and the rest.

While you go through the list of pronouns, be aware that each pronoun is a word that can be used in place of nouns. Consider ways to include these pronouns in sentences since this can help you understand. The following list shows some examples of some common pronouns;

There are twelve main types of pronoun.

Subject pronoun is used, when the thing or person is the subject of the sentence.

When the thing or person is the object of the sentence, object pronouns is used.

Did you remember that for a person to be able to speak with a pronoun, you must introduce the noun before you can use it? This noun has a name: an antecedent.

Antecedents are essential since pronouns can be used in a variety of ways. Take a look at it–“it” could mean a bike, a tree or a car, or a city. But we’ve used the word to mean another thing entirely pronouns’ versatility. Check out these examples to understand how antecedents and pronouns function together:

The intensive pronoun refers to a second noun or pronoun in the same sentence to emphasize its meaning.

The reciprocal pronoun is used to indicate the same action or emotion that is reciprocated.

There are only two reciprocal pronouns;

Here are a some examples of distributive pronouns in sentences:

With this set of activities and explanations, you will quickly determine whether you are making the most effective use of the pronoun and how they could be used to enhance English writings.

Since the pronoun are the main part of English Grammar, the importance of developing English learning skills cannot be undervalued without pronoun.

You can read the above sample sentences about Pronoun to improve your understanding of English grammar.

Encourage your children to learn these basic but commonly used pronoun, by following the simple example sentences given above. Then, save this list of pronoun sentences, handy for your kids in future.

With ESLBLOCK, you will not face problems studying new ideas. If you are in doubt, the qualities of blog post about What is a conjunction, reach us through our blog’s comment section. Keep checking back! We’ll attempt to give you feedback as early as possible. Thank you!