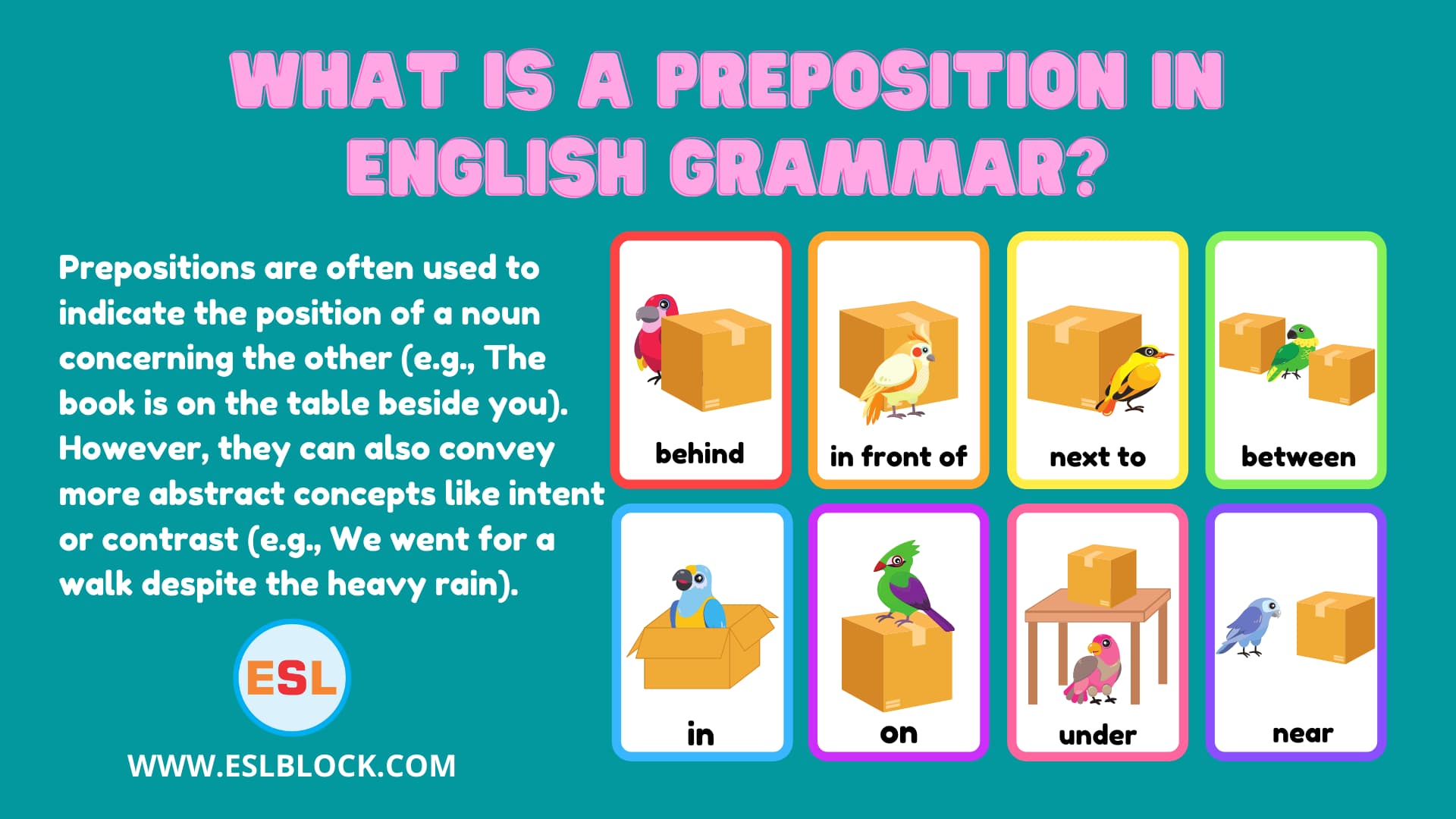 As a guide, the below definitions and tables provide the fundamental use of the preposition. Read on to get a more in-depth explanation of the rules and examples of when and how to use a preposition.

Learn to use preposition with example sentences and ESLBLOCK worksheets for printing.

What is a Preposition?

Prepositions inform us of what or where something is relative to another. Prepositions are one of the nine parts of speech.

Prepositions are often used to indicate the position of a noun concerning the other (e.g., The book is on the table beside you). However, they can also convey more abstract concepts like intent or contrast (e.g., We went for a walk despite the heavy rain).

The word preposition (pre + position) is “place before.” Prepositions typically occur BEFORE the other word–usually a noun phrase. It reveals the relation between the noun and the rest of the sentence. Very popular prepositions include: with, with, at, in, of, on, for, and by.

Pronoun is a radically different part of speech from a noun, verb, conjunction, interjunction, adjective, and the rest.

The majority of prepositions that you experience within your English sentences are “simple” prepositions. Simple words typically contain one or two syllables and connect sentences with words. Here’s a list of the most commonly used simple prepositions:

As you can observe, double words love being in a group. Compound words, on the contrary side, have their own space. Words that are similar to, according to, as for, and prior to are examples of the compound preposition.

Compound words can also be composed of two separate words, much as double words. Two words have only one meaning. Here is an alphabet of prepositions for compound words that are found in English:

Gerunds or -ing variants of verbs can act as connecting words. There aren’t many that can do this, and therefore, there aren’t as many prepositions that are participle. Here’s the list of participle prepositions:

A prepositional phrase listing includes the groups (known in the form of phrases) composed of different words joined to form a connecting word. The phrase can also contain adjectives, verbs, and other elements of speech.

There are five main types of preposition.

There aren’t a lot of connecting words that refer to time, but the words do have a significant role in the English language. These words can explain when something is going to happen or happened. The following list of prepositions contains prepositions for time:

Here are some example sentences showing prepositions of time:

Prepositions to refer to a place, use the prepositions “in” (point itself), “at” (general vicinity), “on” (surface), and “inside” (contained). The following list of prepositions contains prepositions for place:

Here are some example sentences showing prepositions of place:

Here are some example sentences showing prepositions of movement:

Connecting words that describe agents aids your audience in understanding the connection between a pronoun or noun and the other word used in sentences. Every sentence with an agent-related word will clarify how one person affects an individual or something else. Three words indicate an agent-related connection. The words are by, without, and with.. Agent words are similar to the words you’ll see on the list of prepositions used in instruments.

With this set of activities and explanations, you will quickly determine whether you are making the most effective use of the preposition and how they could be used to enhance English writings.

Since the prepositions are the main part of English Grammar, the importance of developing English learning skills cannot be undervalued without preposition.

You can read the above sample sentences about preposition to improve your understanding of English grammar.

Encourage your children to learn these basic but commonly used preposition, by following the simple example sentences given above. Then, save this list of preposition sentences, handy for your kids in future.

With ESLBLOCK, you will not face problems studying new ideas. If you are in doubt, the qualities of blog post about What is a Preposition, reach us through our blog’s comment section. Keep checking back! We’ll attempt to give you feedback as early as possible. Thank you!