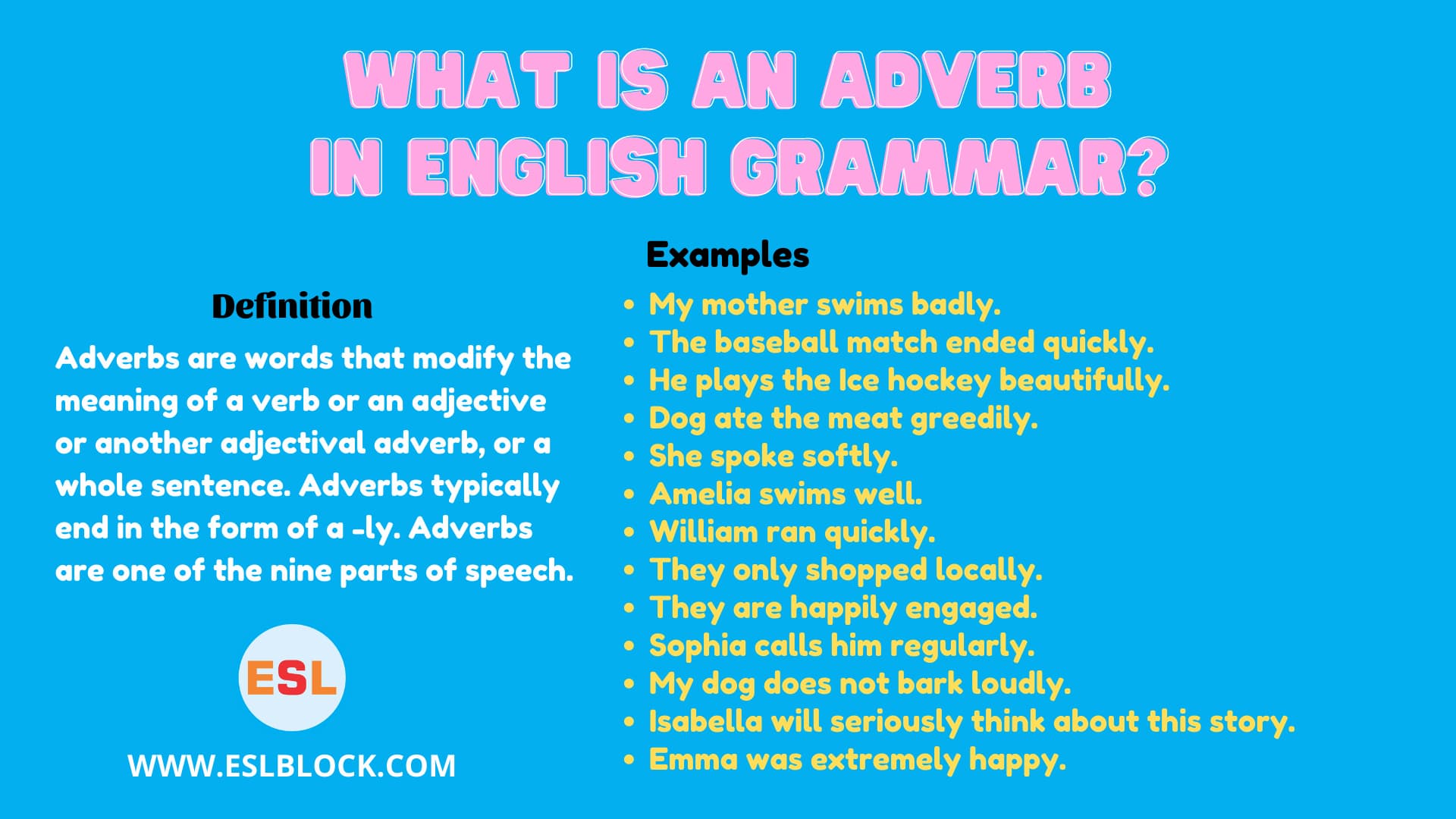 What is an Adverb in English Grammar? We’ll explain the meaning of a adverb, how to use adverb, types of adverbs, and provide a variety of examples of adverb in English. When you’re learning English grammar, you’ve to deal with the adverb. But what exactly is it? And what does adverb do in a sentence? In this article, we will look deeper into the definition of a adverb, how it can be used, and the rules that govern its use. Additionally, we will look at some examples to better understand the purpose of adverbs.

As a guide, the below definitions and tables provide the fundamental use of the adverb. Read on to get a more in-depth explanation of the rules and examples of when and how to use an adverb.

Learn to use adverb with example sentences and ESLBLOCK worksheets for printing.

Table Of Contents
1 What is a Adverb?
2 Adverbs with Verbs
3 Adverbs with Adjectives and other Adverbs
4 Adverbs to Modify a Sentence
5 Adverbs for Comparison
6 Positive Adverbs List
7 Negative Adverbs List
8 Types of Adverbs
8.1 Adverb of Frequency
8.2 Adverb of Manner
8.3 Adverb of Time
8.4 Adverb of Place
8.5 Adverb of Degree
8.6 Adverb of Certainty
8.7 Adverbs of Attitude
8.8 Adverbs of Judgement
8.9 Conjunctive Adverb
8.10 Adverbs of Speed
9 Where Should You Place An Adverb?
10 Adverb InfoGraphics
11 My Considerations
12 Recap of what we just learned
13 Related Topics

What is a Adverb?

Adverbs are words that modify the meaning of a verb or an adjective or another adjectival adverb, or a whole sentence. Adverbs typically end in the form of a -ly. Adverbs are one of the nine parts of speech.

Adverb is a radically different part of speech from a conjunction, interjunction, noun, verb, adjective, and the rest.

Some adverbs can be used with verbs and so cannot modify adjectives. An adverb is used to answer questions like, “how does something happen? Some examples of adverbs with verbs are:

Adverbs with Adjectives and other Adverbs

Adverbs also have the capacity to modify an adjective or another adverb. This is an excellent method of causing an adjective to be more powerful and descriptive, providing a greater clarity of what it is talking about. Think about the phrase “she is smart.” The adjective in this case is smart, however with the use of an adverb, we can identify how smart she is. Take a look at the sentence after it’s been changed:

Here are some further adverb examples of how an adverb can modify an adjective.

Adverbs to Modify a Sentence

Adverbs can be used to modify the entire sentence, and, in this example, typically, it appears at the start of the sentence. If used in this manner, the adverb isn’t discussing a particular thing; however, it is used to provide an overall view of the presented information. Examples of this include:

In some sentences, you may use an adverb to establish a comparison. It is possible to do this by putting more or most before the adverb. Let’s examine the issue in the following sentences.

Here is a list of positive adverbs list, that shows how an action was done in a positive way in the writing.

Frequency adverbs let us know the frequency at which something happens. These adverbs usually be placed before the main verb or near the end of the clause. The most popular adverbs of frequency in this category include:

This is a list of standard single-word time adverbs. Adverbs of time significantly modify verbs and tell us when something occurs. Here are some examples of adverbs of time:

Adverbs of place reveal more information about where the verb took place. Many writers are confused with prepositions which define the place of nouns. Although certain words are prepositions, they are regarded as adjectives when they modify verbs. Additionally, prepositions are followed by objects, but they are not adverbs that are used to describe places. Here are some examples of adverbs of place:

Adverbs of Degree tell us more about the strength of the verb used in the sentence. They define what degree or how much an event took place. Adverbs of degree are typically set before any word that they modify, but in some instances, they are placed after an adjective (such as the word “enough”). Here are some examples of adverbs of degree:

Here are some examples of adverbs of certainty:

Here are some examples of adverbs of attitude:

Here are some examples of adverbs of judgement:

Here are some examples of conjunctive adverb:

The ability to describe how fast an object can move is an effective method to change a verb! Use these adverbs when discussing the speed of a verb. Here are some examples of adverbs of judgement:

Where Should You Place An Adverb?

Different types of adverbs go in various positions in the sentence. Let’s memorize these adverb positions in a sentence, also called adverb placement.

With this set of activities and explanations, you will quickly determine whether you are making the most effective use of the adverb and how they could be used to enhance English writings.

Since the adverbs are the main part of English Grammar, the importance of developing English learning skills cannot be undervalued without adverb.

You can read the above sample sentences about adverb to improve your understanding of English grammar.

Encourage your children to learn these basic but commonly used adverb, by following the simple example sentences given above. Then, save this list of adverb sentences, handy for your kids in future.

With ESLBLOCK, you will not face problems studying new ideas. If you are in doubt, the qualities of blog post about What is an adverb, reach us through our blog’s comment section. Keep checking back! We’ll attempt to give you feedback as early as possible. Thank you!