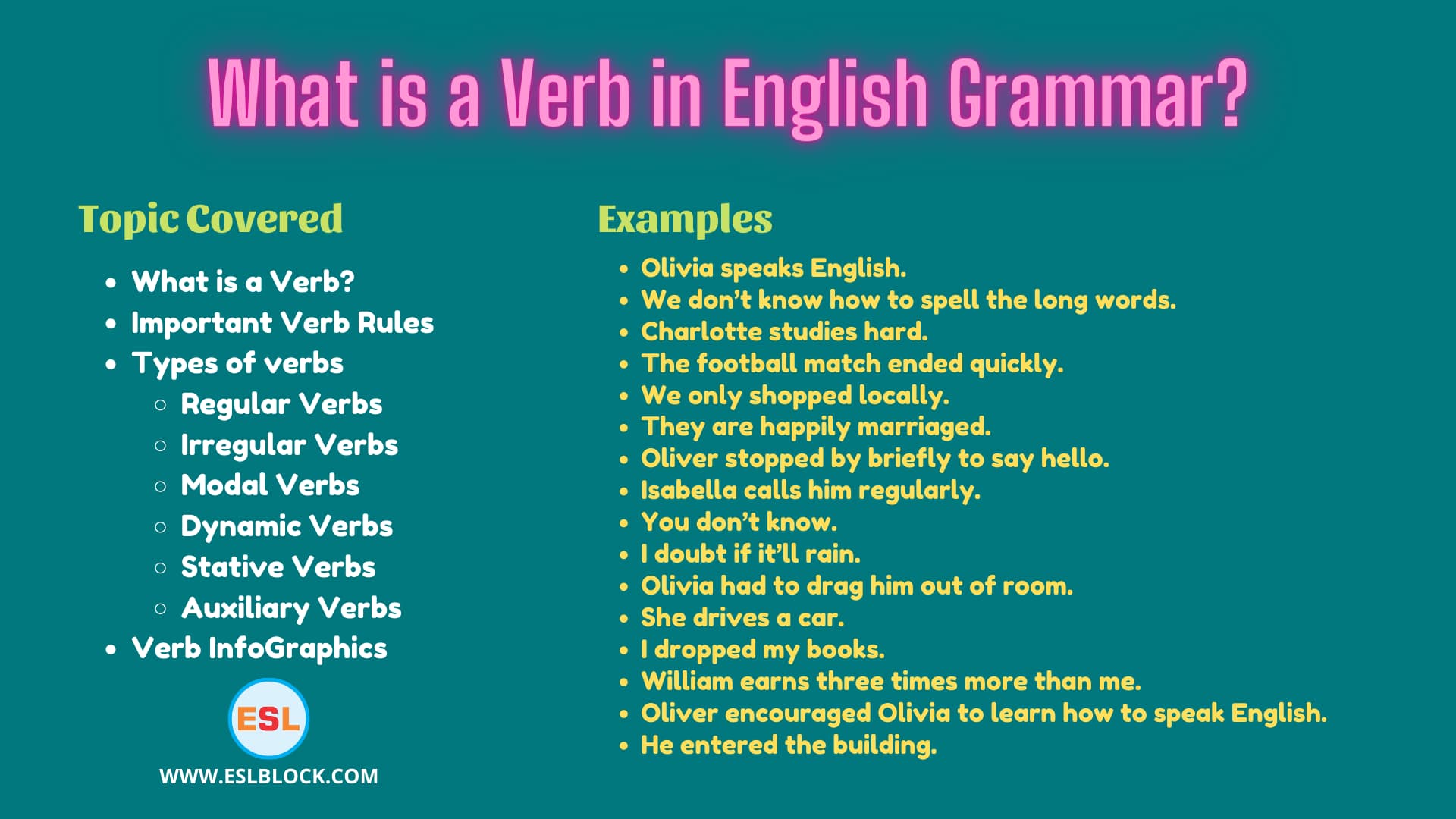 What is a Verb in English Grammar? We’ll explain the meaning of a verb, how to use verb, types of verbs, and provide a variety of examples of verb in English. When you’re learning English grammar, you’ve to deal with the verb. But what exactly is it? And what does verb do in a sentence? In this article, we will look deeper into the definition of a verb, how it can be used, and the rules that govern its use. Additionally, we will look at some examples to better understand the purpose of verbs.

As a guide, the below definitions and tables provide the fundamental use of the verb. Read on to get a more in-depth explanation of the rules and examples of when and how to use a verb.

Learn to use verb with example sentences and ESLBLOCK worksheets for printing.

What is a Verb?

A verb is a word that characteristically is the grammatical base of a predicate and defines an act, event, or mode of being, that in different languages is inflected for agreement with the subject, for tense, for mood, for voice, or for aspect, and that typically has complete descriptive sense and representing quality but is sometimes nearly devoid of these primarily when used as linking or an auxiliary verb. Verbs are one of the nine parts of speech.

Some example sentences of verbs;

The verb is a radically different part of speech from a preposition, conjunction, interjunction, noun, pronoun, adjective, and the rest.

There are many rules covering the use of verbs in the English language. Let’s take a glance at the most significant verb rules.

Rregular Verbs Definition: Verbs differ from most other parts of speech because they can change their form. Sometimes, endings can be included -ed or -ing, and at other times, the verb is a different word (such as put and put).

Regular verbs are words which form past-tense simply by putting the letter “d” or “ed” at the end.

Following are the common regular verbs.

Irregular Verbs Definition: Irregular verbs are one of the simple and common types of verbs. A verb in which the past tense is not formed by adding the usual -ed or -d at the end. Following are the common irregular verbs.

Dynamic Verb Definition: A dynamic verb (such as go, ride, go, read, write) primarily indicates an action, process, or sensation. A dynamic verb is a verb that shows continued or progressive action on the part of the subject. This is contrary to a stative verb. Following are the common dynamic verbs.

Stative Verb Definition: Some English verbs not used in continuous tenses are called stative verbs or non-continuous verbs. Stative verbs are verbs that describe a state rather than an action. Stative verbs usually bond to emotions, thoughts, relationships, senses, states of being and measurements. Following are the common examples stative verbs.

Auxiliary Verb Definition: A verb is used in forming the tenses, moods, and voices of other verbs. The auxiliary verbs help the main verb to describe actions. The primary auxiliary verbs in English are be, do, and have. Following are the common examples of Auxiliary verbs.

With this set of activities and explanations, you will quickly determine whether you are making the most effective use of the verb and how they could be used to enhance English writings.

Since the verbs are the main part of English Grammar, the importance of developing English learning skills cannot be undervalued without verb.

You can read the above sample sentences about verb to improve your understanding of English grammar.

Encourage your children to learn these basic but commonly used verb, by following the simple example sentences given above. Then, save this list of verb sentences, handy for your kids in future.

With ESLBLOCK, you will not face problems studying new ideas. If you are in doubt, the qualities of blog post about What is a verb, reach us through our blog’s comment section. Keep checking back! We’ll attempt to give you feedback as early as possible. Thank you!

3 thoughts on “What is a Verb in English Grammar?”