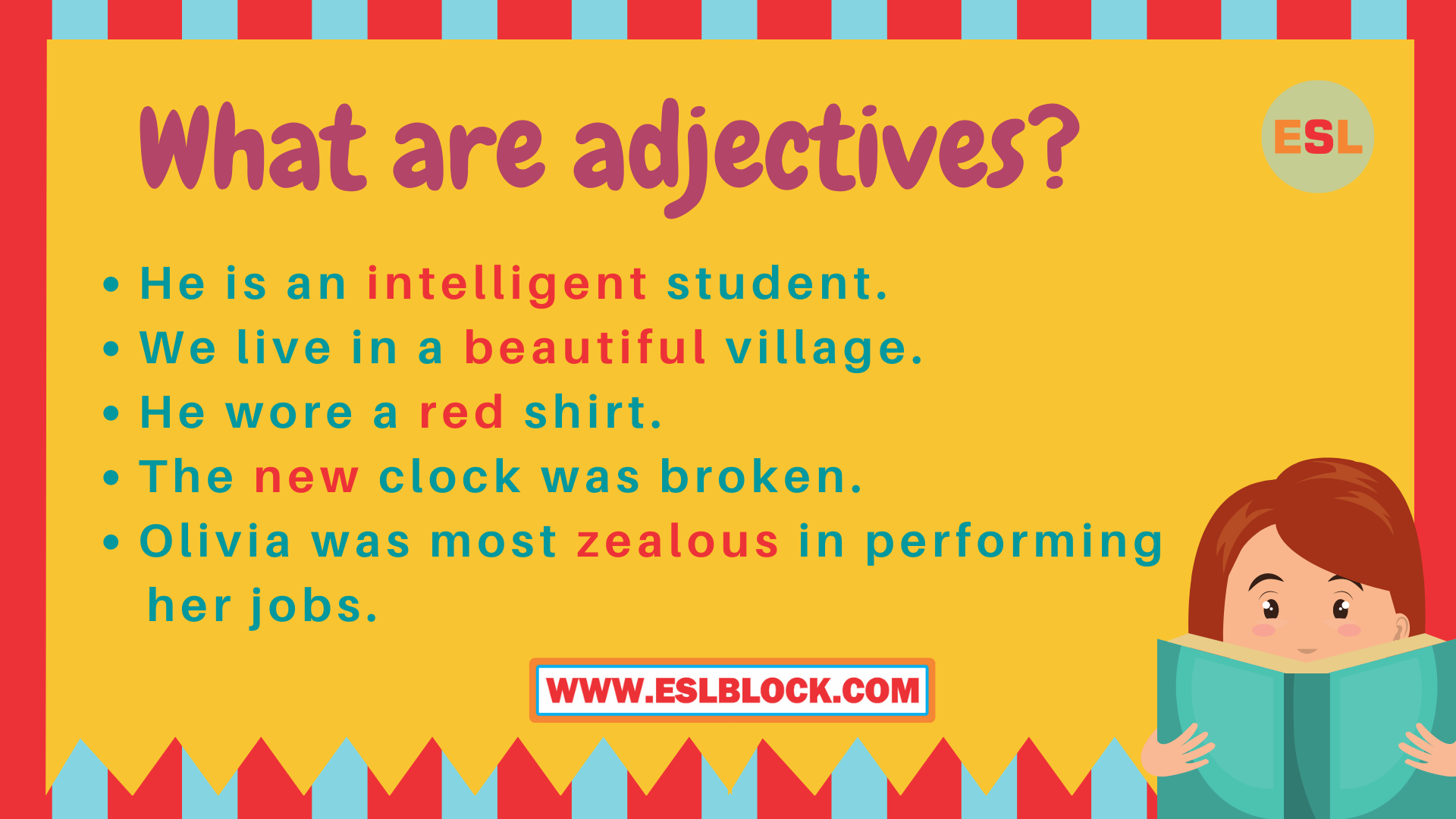 What exactly is an adjective? In the simplest terms, an adjective is a term used to define a noun. The adjectives can give a piece of additional descriptive information to the sentence.

For example, you might use something like to describe a student “He is a student.” If you want to include an adjective in the sentence, you could convey clearer information of what you are trying to tell by saying something like “He is an intelligent student.” or “He is a good student.” An adjective is one of the nine parts of speech.

What is the importance of adjectives?

An adjective is an important part of many sentences and is used in all languages, but what is its importance in English? Adjectives are used in various ways and can help writers or speakers clarify something and give readers a better understanding of the topic being discussed. They can be found in many styles and, depending on their structure and the kind of word they are changing, they will be based on the context in which they are used within an article.

An adjective may refer to the size, color, condition, quantity, sense, appearance, time, or personality of a noun or pronoun. Furthermore, adjectives can be capable of expressing differences in degree.

But, while adjectives only have to be used to describe something, they may be used for expressing something that isn’t tangible. An excellent example is using adjectives to describe the person’s character. It could be something like, “My teacher is an intelligent man.”

Adjectives are an excellent way to stimulate your senses through descriptions of visual aspects like taste, smell, sound, and emotions or non-physical characteristics.

English Adjectives are identified through their ends. Common adjective endings are as follows:

The following list of adjectives used in English is a great place to build your English vocabulary.

Types of Adjectives in English

In several languages, adjectives representing attributes typically occur in a particular order. For example, the most common adjective order used in English is:

Where to Place an Adjective in a Sentence?

To ensure you have an appropriately constructed and grammatically correct phrase, it is essential to put adjectives in the proper location. In this article, we will explore the appropriate place for adjectives to be placed in the sentence to appear as authentic as they can be.

Between a Possessive and a Noun

Adjective after the Verbs

Adjectives Can Act As Complements

Adjectives can also act as complements. For example:

Comparison of Adjectives by Degrees

Adjectives come in a three-degree like positive, comparative, or superlative.

It is a usual kind of adjective. The positive degree refers to a single object, person or place. Positive adjectives are used to define something without making any comparison with any other thing. For example, in the sentence “She is pretty.” or “This is a good movie.”

The comparative adjective is used to describe a comparison between two things. It is usually preceded by the word “than”, which can be seen in the example. “I am nicer than him.” or “This short is better than the first one.”

It indicates the quantity or quality is at its highest or most intensive. The term “superlative” refers to something being at its highest or superior. You may see it in the following instances. “I am the richest of all the relatives.” or “This is the best song out of the entire album.”

Adjectives Ending in -ED and -ING

Here is the best List of adjectives ending in -ED and -ING.

What are Adjective Suffixes?

The word “adjective” can define a range of things, from how an object appears to how it smells or its shape. Now, let’s take a look at some examples of adjectives used to describe various things.

Since the Adjective is the main part of reading, the importance of developing vocabulary cannot be undervalued. A well-developed vocabulary enhances every aspect of communication, including speaking, listening, reading, writing and speaking.

You can read these simple Adjective words to improve your vocabulary.

Encourage your children to master these basic but often encountered adjective words by following the simple example given above. Then, save this list about adjectives in English, handy for future use.

If you enjoyed a printable infographic about what are adjectives, I’d be very thankful if you’d help it spread by emailing it to your friends or sharing it on Twitter, Instagram, or Facebook. Thank you!

Explore the full list of words that start with A to Z!

17 thoughts on “What are Adjectives? Definition, Types, Usage with Examples”