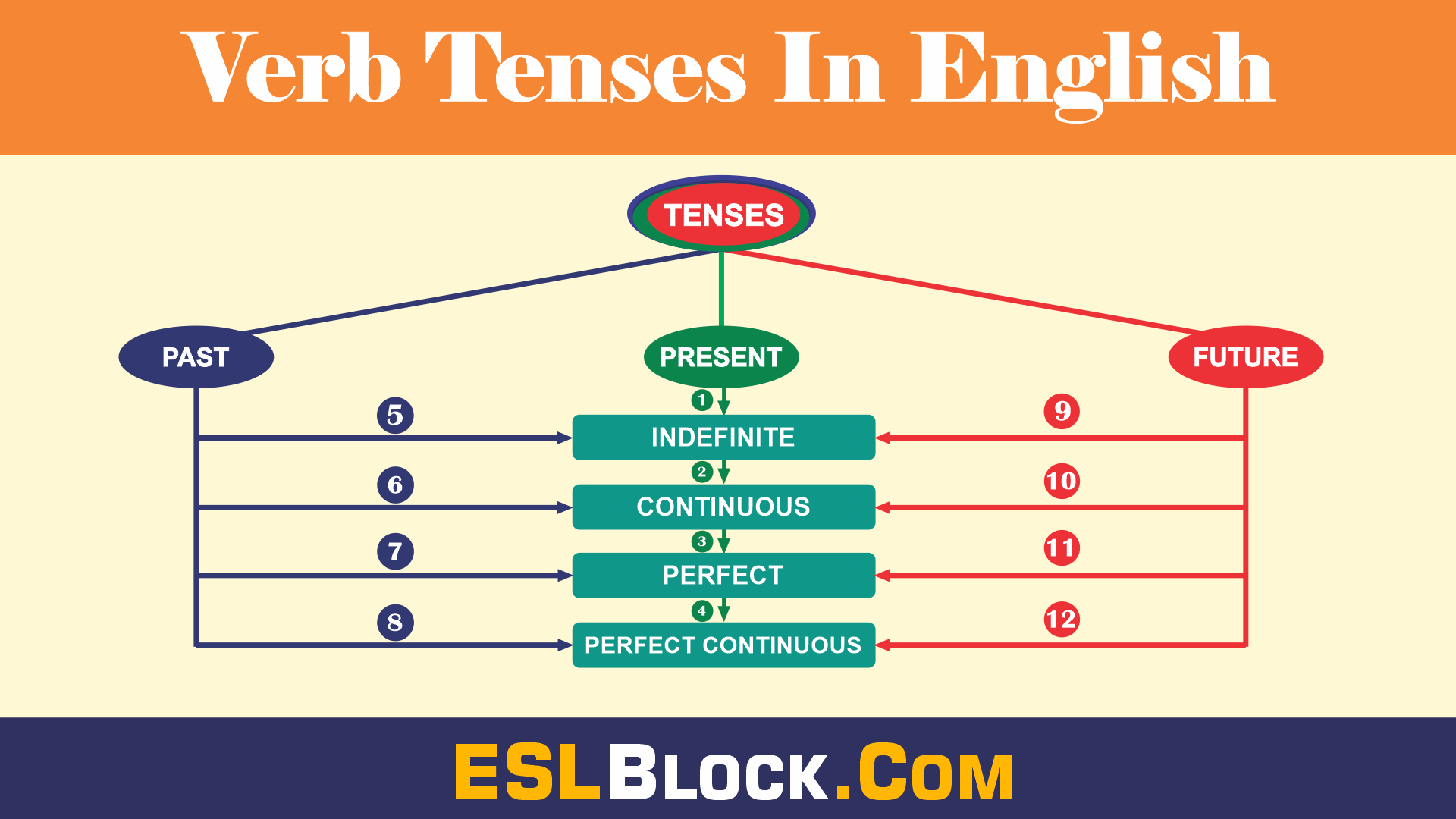 Do you wish to improve the quality of your English verb tense knowledge? In the present, past, and future, do you understand the tenses of your verbs? This article for teachers can aid in boosting your memory.

English Tenses can be useful when learning to speak the English language from the beginning.

Three major kinds of tenses are explained when the event mentioned in the statement took place.

Many English learners are worried about the tense. If you met 100 native English users in public and asked questions about the tense of their sentences, only one could give you an answer – if lucky enough. The remaining 99 will be clueless about phrases such as “past perfect” or “present continuous.” They can communicate fluently in English and communicate with ease. Of course, to communicate effectively in ESL, it’s helpful to learn about the tenses. But don’t get obsessed with the tenses. Learn to speak like native speakers! Naturally, speak!

Various verb forms to describe various actions at various moments in time are thought to be grammatical Tenses, also known as Verb Tenses. What is the definition of verb tenses, and how can you make use of these words? This article will look at verb tenses and will cover frequent mistakes, regional usages, and examples, as well as an examination of verb tenses and their variants.

What Are English Verb Tenses?

The verb’s tense tells that a person has done an act or was involved in something or took place. There are three primary verbs tenses in English: the present, the past, and future.

These categories (past, present, and future) are subdivided into four categories: simple continuous, perfect and flawless perpetual tenses.

The four categories (simple, continuous, perfect, and perfect continuous tenses) can be applied to various periods and states of operation. The details of the 12 tenses will be discussed in the next sections.

A verb can only have two main forms, the past and present tense. The other tenses may be created by incorporating words like auxiliary verbs, is, am, are, has been, were, had, will, have, etc. This article will go over all the verb tenses and how to use them properly.

“Simple tense” is a type of verb tenses. It includes all three tense types: the simple past tense, the simple present tense, and the simple future tense.

The three easy tenses convey facts or regular tasks. In contrast to the other tenses, the simple tenses define actions without stating specifically whether the actions have been completed or ongoing.

It is possible to use a variety of forms and tenses when talking about the past. However, it is the Past Simple tense, the one we mostly use.

In this lesson , we will explore how to use the arrangement and usage of Past Simple Tense. Then the quiz will be provided to assess your knowledge.

The past verb tense is used when discussing an action which has already taken place. It does not use the helping verbs. There are a set of rules to transform specific present verbs into past forms. Most verbs that are in the past tense (second form) include an additional “-d” or “-ed” following the base form. However, there are spelling changes.

Here are a few examples explaining simple past tense:

The simple future verb tense indicates an action that is to happen. It typically uses the words shall and will to indicate that it will continue to occur in the near future.

The future tense (e.g. I will or shall travel; he will speak, and we will speak) refers to events that haven’t occurred yet in the sense of time, but are expected, scheduled or expected to happen in the near future. Here are some of the most frequent scenarios where the future tense is used: To ask for information about the future (you will be in Washington tomorrow; OK,  I’ll write that report on Monday).

Although it’s a present tense, present progressive tense could refer to an event scheduled to occur in the near future (especially for planned activities).

Past progressive tense can be difficult for many people who aren’t native users to grasp because many languages do not have an equivalent.

The term “past progressive” describes an event taking place at a particular time during the previous days.

Here are a few examples explaining Past Progressive Tense:

The future progressive tense is used for a continuing action that will occur in the future.

Future continuous tense is called “the future progressive tense is an example of a verb tense which indicates that something is going to happen in the near future and will continue for a certain amount of time.

It is constructed with the help of the formula, will/shall be + verb + ing.

There are three things to consider to keep in mind when dealing the perfect present. Firstly the act is already completed just like all other perfect tenses. Secondly is that it could be referring to an event which was completed at an indefinite period of time in the past. And thirdly, it may be a reference to an event that began in the past, and continues with the present. Present perfect tense can be constructed making use of have/have and the past participle in the main verb.

Past perfect describes an event that has been completed before an incident in the past. To make the past perfect tense first use the word “had” and then join it to the past participle form.

Future perfect tense can be used to signify an event that is coming up and has a specific date for its end. It follows a pattern that is will + have + 3rd form of verb.

For example, “Amelia will have gardened by then.” The essence in these tenses is you’re in the future, however there’s an end to it that has been in place prior to this imagined future. Let’s examine some examples of future perfect tense to clear things up.

If you’re having any doubts about the qualities of a English Tenses and example sentences, you can leave a comment below, and we’ll attempt to give you feedback.

If you really enjoyed article “English Tenses“, then I will be very thankful if you’d help it spread by emailing it to your friends, or sharing it on Twitter, Instagram, Pinterest or Facebook. Thank you!