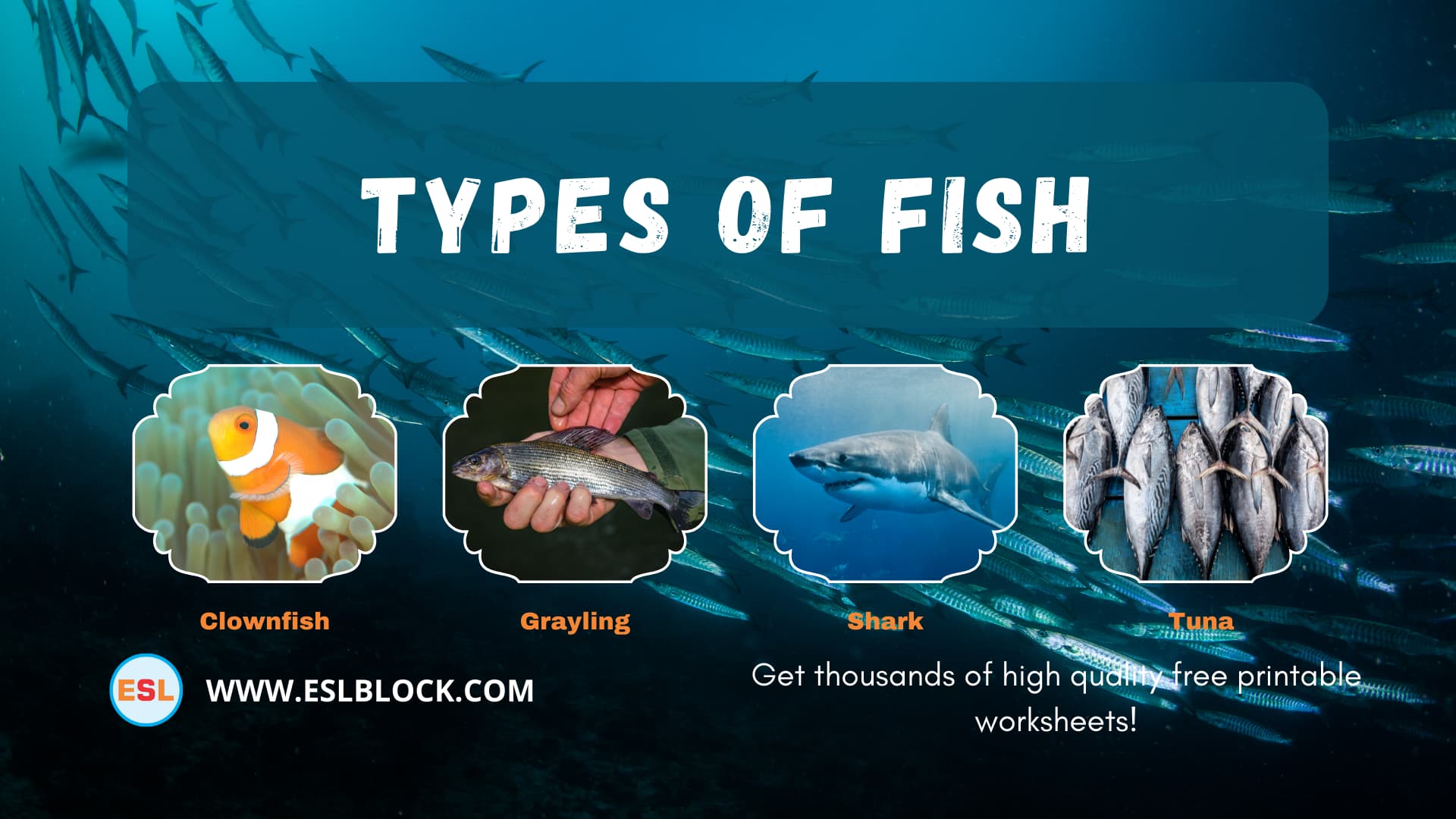 What are Fish in English Vocabulary? In this article, I am going to provide you a list of Fish!

Fish are classed as aquatic vertebrates, which means they usually have gills, paired fins, a long body covered with scales, and tend to be cold-blooded.

Fish (the) is a common term for lampreys, sharks, coelacanths, and ray-finned fish. It is not a classified taxonomic grouping of animals, either. Instead, there are three main types– bony fish (Osteichthyes), jawless fish (Agnatha), and cartilaginous fish (Chondrichthyes). The diversity among them is incredible as well– there are over 33,000 species of fish worldwide!

All these fish are verified, using acknowledged sources for their genuineness before being enlisted. Source: Your Info Master.

Fish are a type of vertebrate that inhabit both fresh and salt water. They are distinguished from other aquatic creatures, such as amphibians and reptiles, by the presence of a backbone and paired fins on their back. Fish can be found in all corners of the Earth, from the ocean’s depths to the freezing temperatures of glaciers.

Fish have a long history with humans. In ancient times, people used to fish for food, fuel, bait, and medicine. Today, people continue to use fish for many purposes.

Fish are essential for human food because they provide high-quality protein and low-cost calories. They are also used for oil production, fertilizer production, and fishing gear manufacturing. Overall, fish play an important role in our world economy!

Here are different types of fish in English that will encourage your English Vocabulary.

It is a fact that there are too many lovely fish; it is challenging to choose to include them in the list.

There are lots of different types of fish out there, and this number increases every day.

Fish of different types can be classified based on the type of tissue that makes up their skeleton or jaw, and this can help determine what they are. Bony fish are those with a bony endoskeleton while jawless fish have no chin and feed through scraping or sucking nutrients. Finally, cartilaginous fish have jaws and skeletons made of cartilage.

There are three main types of freshwater fish: diadromous, anadromous, and catadromous fish.

The following list of over 500 fish types, is for you. All these fish are validated using recognized world dictionaries and encyclopedias.

When it comes to freshwater fish, there are various types to choose from. Fish such as bettas, cichlids, guppies, and barbs can all be excellent for beginner fish keepers.

However, if you’re looking for something more exciting and challenging, you’ll want to consider selecting a fish like a golden trout or salmon. These fish often require a bit more care than other freshwater fish, but they make great additions to any aquarium.

Saltwater fish are a popular choice for those looking for a healthier and more environmentally friendly option when it comes to seafood. These fish typically live in salt water and eat plankton, which helps keep the marine ecosystem healthy. Additionally, many saltwater fish are low in cholesterol and high in nutrients, making them a healthy choice overall.

Some of the most popular saltwater fish include tuna, mackerel, king mackerel, barracuda, and yellowfin tuna. Each fish has its unique flavor and texture, sure to please even the most finicky eater. In addition to eating fresh, many saltwater fish can be used in recipes such as sushi or sashimi. Whether you’re looking to enjoy the taste of the sea or cook up a delicious dish at home, saltwater fish is an excellent option for anyone seeking sustainable seafood options.

All fish are cold-blooded or ectothermic. This means they cannot regulate their core temperature, making them depend on external sources of warmth such as water to survive. Even warm-blooded fish such as tuna and mackerel sharks have only “regional endothermy” or a limited ability to generate their heat.

Fish have gills throughout their life cycle, including their juvenile and mature stages. Like fish, not all animals with gills are fish.

Fish bladders are specialized organs that help fish float and keep them alive in low-oxygen environments. These organs also help fish sleep as humans do and are sensitive enough to detect food movement, predators, and more.

Swordfish are known as broadbills and are members of the Xiphiidae family. They are large predatory fish that migrate as the season’s change. They are popular sport fish and have elongated round bodies. They thrive in tropical Indian, Pacific, and Atlantic regions.

Their long ‘sword’ enables them to slash at prey, injuring the animal, so it is easier to catch and eat. Their long bodies make them agile and fast prey killers, allowing them to sustain their speed and agility as they hunt. They can live up to 9 years if they aren’t hunted for sport or food by humans.

Lampreys are parasitic sea-dwelling fish that feed by attaching themselves to other fish and slowly eating them from the inside out.

Lampreys are jawless fish that use a multi-toothed, sucker-like mouth to attach as a parasite. The Sea Lamprey (Petromyzon marinus) is native solely to the North Atlantic and invades the Great Lakes because of their unsuitable habitat.

The Atlantic cod is from the Gadidae family and is primarily hunted for food by humans. It’s been labeled as vulnerable by the International Union for Conservation of Nature (ICUN) due to over-fishing for human consumption.

It can live up to 25 years and comes in green or brown colors with spots on the dorsal side. They usually have a length of 61cm – 1.2m and weigh up to 40kg, though they’ll probably be smaller in warmer waters.

There are about 150 species of catfish and fishes in the family catfishes. They have whisker-like feelers called barbels on the upper part of their epicenter (the point furthest from the tail). They live both in fresh and salt waters with great adaptability.

Tuna are giant, saltwater fish that swim up to 43 miles an hour and weigh up to 2,000 pounds before they mate. Tuna can swim over 100 miles daily during their two- to four-month mating period. Noted as a prevalent commercial fish, tuna can be caught commercially in many forms, including fresh, canned, and frozen.

The Red Mullet is a demersal fish that thrives in the Black Sea, the eastern North Atlantic Ocean, and the Mediterranean Sea. It’s commonly found in waters scavenging for crabs, shellfish, small lobsters, marine worms, and even dead fish to eat.

They grow up to 18 inches and weigh around 550 grams. The Red Mullet is a beloved delicacy in the Mediterranean, cooked in many different ways. Throughout history, this fish has been prized as a favorite on ornate and exquisite plates.

There are currently seven species of herring in the genus Clupeus. These fish can be found in colder waters off the coast of the northern North Atlantic and are known to have scales that run along their long bodies and forked tails. Known for its delicious taste, herring is often pickled, salted, or smoked.

Although they are native to the swamps, mudskippers can travel on land. They also have chambers where they can store oxygen behind flaps that close up to avoid getting water.

Flying fish is a type of ocean fish that have long fins and can glide short distances. They belong to Beloniformes, which comprises tropical Atlantic, Caribbean, and Pacific waters.

There are over 500 species of fish called eels, and they can live in fresh and saltwater environments. The American eel (Anguilla rostrata) is a nocturnal eater that eats crustaceans and insects.

There are over 500 varieties of shark, which includes both saltwater and freshwater sharks. Though some sharks may be seen as harmless, there are numerous cases where sharks have attacked people. Some sharks known to attack humans are the Tiger, Lemon, Blue, Great White, and Mako sharks.

Although goldfish are from the freshwater family, they are one of the most common pets used for aquariums. They were first bred in an ancient Chinese fishing village over a thousand years ago and have since developed into many different breeds.

Rays are cartilaginous fish and belong to the order Batoidea. There are many kinds of rays, and they have a flat shape when they swim, patterned with dark spots on their backs and tubercles on the top of their head. Some Rays, like the Manta and Spotted Eagle Ray, even have “flying” appearances underwater!

Carp are freshwater fish species that are bony and have scales that are large in appearance. The Common Carp is native to eastern European seas and rivers but was introduced to the United States in the early 1830s and is now widespread there.

Coelacanths are a rare fish found in the tropical waters of the Indian Ocean and off the west coast of Indonesia. It was thought to be extinct until recently when live specimens were rediscovered about a hundred years later.

If you love to watch and capture stunning fighting fish, the Siamese Fighting Fish is one of the most popular aquarium fish. Sure, they’re expensive, but it’s clear why so many people want them.

They can come in all sorts of beautiful colors and are territorial beasts that like to fight for their territory–and the females will go after any other fish of the same species released into the same tank.

They’re found in Cambodia, Vietnam, Laos, and Thailand and live in rice paddies and rivers. They thrive as a result of human interaction and status as a vulnerable species on account of trade.

The Rainbow Trout is a widespread trout species native to North America. On average, adult Rainbow Trout weigh 2 to 8 pounds and measure up to 16 inches long. They’re identified by their olive-brown skin, pink streak on the back, and silver-white underside.

In the Pacific, there are seven known species of Salmon. The Chinook, Pink, Sockeye, Chum, Amago, Masu, and Coho are all found off the North American coast. Two (the Amago and Masu) are off the coast of Asia. Salmon can travel up to 1000 miles to feed.

The Barramundi fish is commonly known as the Asian Sea Bass or the Catadromous. It is part of a catadromous species found in the Indo-West Pacific region ranging from Southeast Asia to Northern Australia. They are trendy in Thai, your favorite dish!

Mahi-Mahi fish or Dolphin Fish are commonly found in tropical, subtropical, and temperate off-shore waters worldwide. This ray-finned fish typically stays near the surface of the water.

The List of Fish infographic can help educators and learners share their thoughts. Infographics are one of the most effective ways to communicate information engagingly effectively. They are helpful for both print and the website.

With ESLBLOCK, you will study with new ideas. If you doubt the qualities of List of Fish, reach us through our blog’s comment section. Keep checking back! We’ll do our best to give you feedback as soon as possible. Thank you!