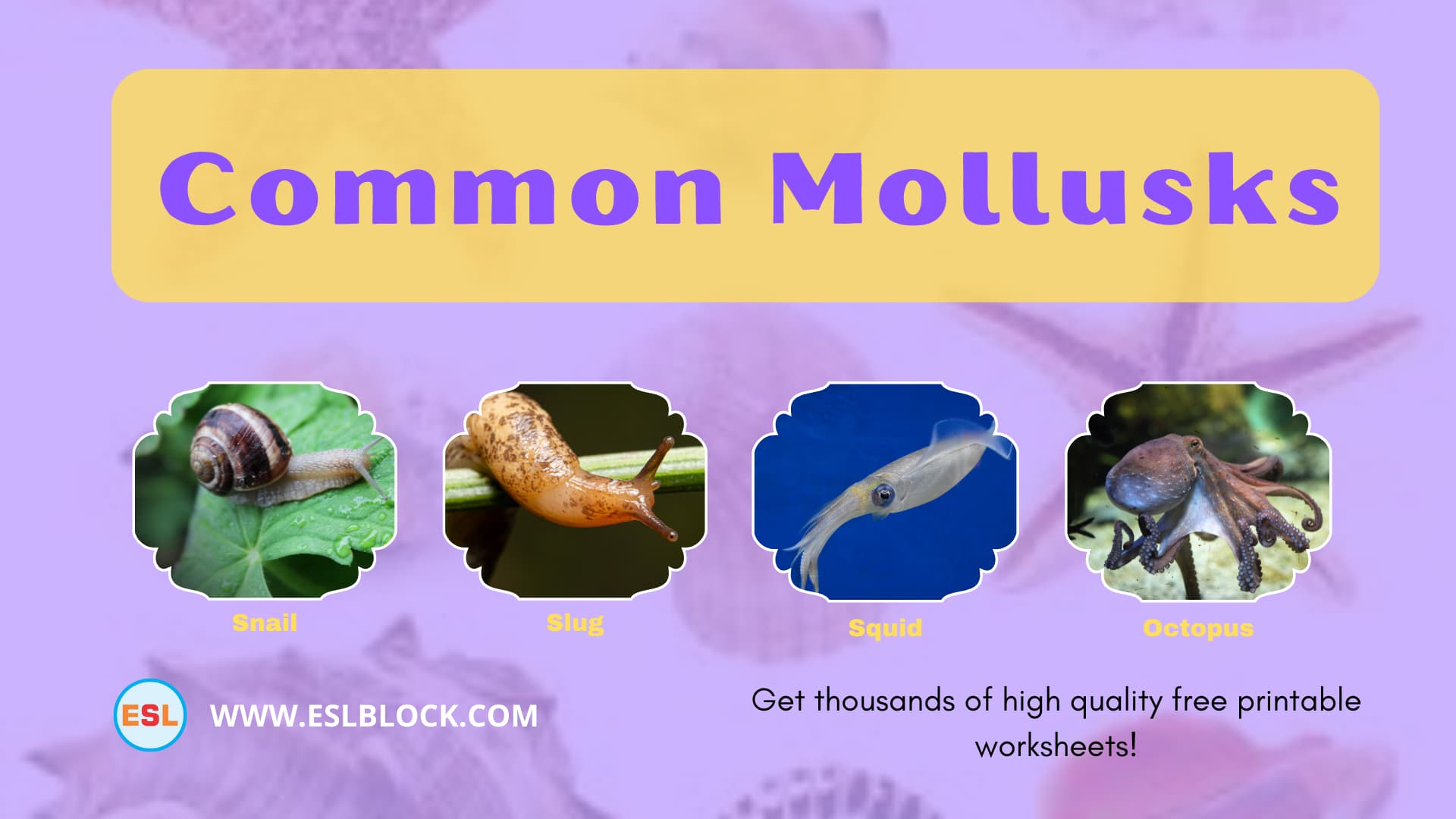 What are Mollusks in English Vocabulary? In this article, I am going to provide you a list of Mollusks!

Mollusks are a large and diverse group of invertebrate animals, including snails, slugs, clams, oysters, and octopuses. They are in fresh and saltwater environments and have many shapes and sizes.

Mollusks are characterized by their soft bodies and lack of a hard skeleton. Most mollusks have a shell that protects their body from predators and the environment.

Mollusks are an essential food source for humans and other animals. They are also used in producing pearls, mother-of-pearl, and shells. Some mollusks can cause human disease, such as certain types of oysters that can transmit typhoid fever.

Mollusks are a classification of invertebrate animals, which diverged early in the phylum’s evolution.

All these mollusks are verified, using acknowledged sources for their genuineness before being enlisted. Source: Your Info Master.

Kingdom Animalia includes all kinds of animals, regardless of size or body structure. These animals are classified according to their taxonomic rank, which provides for their domain, kingdoms, phyla, classes, orders, families, genera, and species.

Invertebrates are animals without a backbone. There are many species of these animals, and they can be classified under several phyla. The Phylum Mollusca is the second-largest phylum after Phylum Arthropoda.

Mollusks come from the word “mollies,” which means soft. Mollusks are invertebrates with soft bodies and belong to the family of Phylum Mollusca.

Many live in marine environments, while others prefer freshwater or land environments. Phylum Mollusca includes over 80,000 species. Mollusk species can be herbivores, parasites, or predators.

Here are different types of mollusks in English that will encourage your English Vocabulary.

It is a fact that there are too many lovely mollusks; it is challenging to choose to include them in the list.

There are many different types of mollusks, and each breed has its own unique set of characteristics. Some mollusks are small and cute, while others are big and muscular.

The following list of over 50 mollusks types, is for you. All these mollusks are validated using recognized world dictionaries and encyclopedias.

There are many mollusk characteristics. These include:

There are four main classes of mollusks: Gastropoda (Gastropoda), Bivalvia, Cephalopoda, and Polyplacophora. There are many types of mollusk organisms in these classes. The three main groups of mollusks that are most important to consider are gastropods and cephalopods.

The largest class of mollusks is Gastropoda. It includes over 70,000 species. Gastropods can be found on land, in freshwater, and in marine areas. The gastropod’s head is well-developed and has tentacles. For crawling, gastropods use their muscles foot.

The majority of members belonging to this class have an outer shell that is spirally spiral, such as a conch shell. Others have a flattened or twisted shell. Some others don’t have any shells at all. Some land-dwelling gastropods also have a lung-like structure in their mantles and are called pulmonate (possess a lung). Slugs and snails are examples of gastropods.

Bivalves are part of the Bivalvia class, with an estimated 10,000 species. They prefer to live in freshwater and marine waters with a pH of at least 5. These organisms are more likely to be killed by water with a pH below 5.

Cephalopods can include octopi and nautiluses. Cephalopods, like giant squid, can grow up to 59 feet (18 m) in length. This is not the case with Mollusca’s small gastropod and bivalve varieties. Cephalopods have three hearts that beat blue and copper-binding blood throughout the body. Cephalopods have giant brains of invertebrates and are capable of learning. Cephalopods also have an ink pouch that can blind predators and give them a chance to escape.

Snails, and land mollusks, move with one “foot” across the floor. This leaves behind a trail of slime that is toxic to predators. They are easily identifiable by their shells and will hide in them when they feel threatened. This prevents predatory birds and creatures from attempting to take the snail.

In hotter climates, they are known to remain inactive for long periods. They are only known to be active in damp or rainy weather and only travel for breeding purposes.

On the other hand, Slugs are not active in temperatures above 5C. In colder temperatures, slugs keep themselves hidden under the soil as they can’t survive. They don’t have a shell around their backs. Each slug has both male and feminine reproductive organs. However, they must find a partner to produce offspring.

Oysters eat plankton by filtering water through the gills. Oysters are covered with a hard shell and can filter up to 1.3 gallons per hour. Oysters are a famous mollusk that humans love to eat and have been considered a culinary masterpiece since prehistoric times.

Another marine mollusk, the clam, can close its shell with a vice grip. Not even a strongman can do it without difficulty. The clam does not have a head, arms, or teeth. It eats plankton, like oysters, and filters the water into their bodies.

These mollusks do not have an outer shell to protect them like the rest of the species. These mollusks are more prey-oriented by nature and don’t find themselves being hunted as often as the more diminutive family members. Squids will use their long tentacles to catch prey, but they remain hidden otherwise. They have large, bulbous eyes that are not found in other mollusks.

Octopi are some of the most intelligent creatures in the world. Octopi have eight arms and a bubbly, distinctive head that distinguishes them from other marine life. An octopus has three hearts, blue blood, and squirts ink to deter predators. It is a valuable tool that can be used to help them escape.

Abalone is a gastropod and mollusk that lives in coastal seawater. It is a member of the Haliotidae Family and can grow to a size of 4-10 inches. It has one shell and uses its large foot to cling to rocks and eat algae. The abalone shell has a flat, spiral-shaped shape with small holes at the edges. Because of its shape, it is also known as ear shells or sea ears. Its interior is a dazzling mother-of-pearl (nacre) pattern that is just as valuable as the meat it protects.

One explanation for ammonites before we knew what they were was that they were snake-like coiled-ups that had been made into stone. This earned them the nickname “snakestones.” Ammonites were not reptiles. They were ocean-dwelling mollusks.

About 450 million years ago, the subclass Ammonoidea, also known as ammonites or Ammonoidea, was first discovered.

Ammonoidea also includes Ammonitida, a particular group better known as true ammonites. These animals were discovered in the Jurassic Period around 200 million years ago.

Most ammonites died at the end-Cretaceous Period, 66 million years ago, along with non-avian dinosaurs.

Zoe states, “We didn’t lose all of them at the end of the Cretaceous.” Several species survived into the Palaeogene of the Western Interior Seaway but eventually died out.

The most common barnacle species in waterways around the globe are acorn barnacles. Barnacle removal is a tedious task that requires elbow grease or a pressure washer, as anyone who has ever owned a boat knows. Boaters refer to them as “crusty foulers” because they are so hard to remove.

Barnacles attach to the undersides and bodies of sea creatures, as well as to other marine life. The barnacles secrete a cement fast-curing that is one of the most potent natural glues. It has a muscular tensile strength of up to 125 lbs. Five thousand pounds Per Square inch. It has a power of 1.2M. 22-60 pounds per square inch. Researchers are working to find a commercial use for the glue.

Cuttlefish, despite their name, are not fish. They are intelligent invertebrates that are related to the Octopus and Squid. These fantastic creatures can count and exercise self-control. They also have clever strategies to avoid predators. Cuttlefish are colorblind but have advanced color-changing capabilities.

More than 120 species of cuttlefish can be found in oceans around the globe. While most species live in shallow waters, some can be found at depths greater than 3,000 feet.

The List of Mollusks infographic can help educators and learners share their thoughts. Infographics are one of the most effective ways to communicate information engagingly effectively. They are helpful for both print and the website.

With ESLBLOCK, you will study with new ideas. If you doubt the qualities of List of Mollusks, reach us through our blog’s comment section. Keep checking back! We’ll do our best to give you feedback as soon as possible. Thank you!