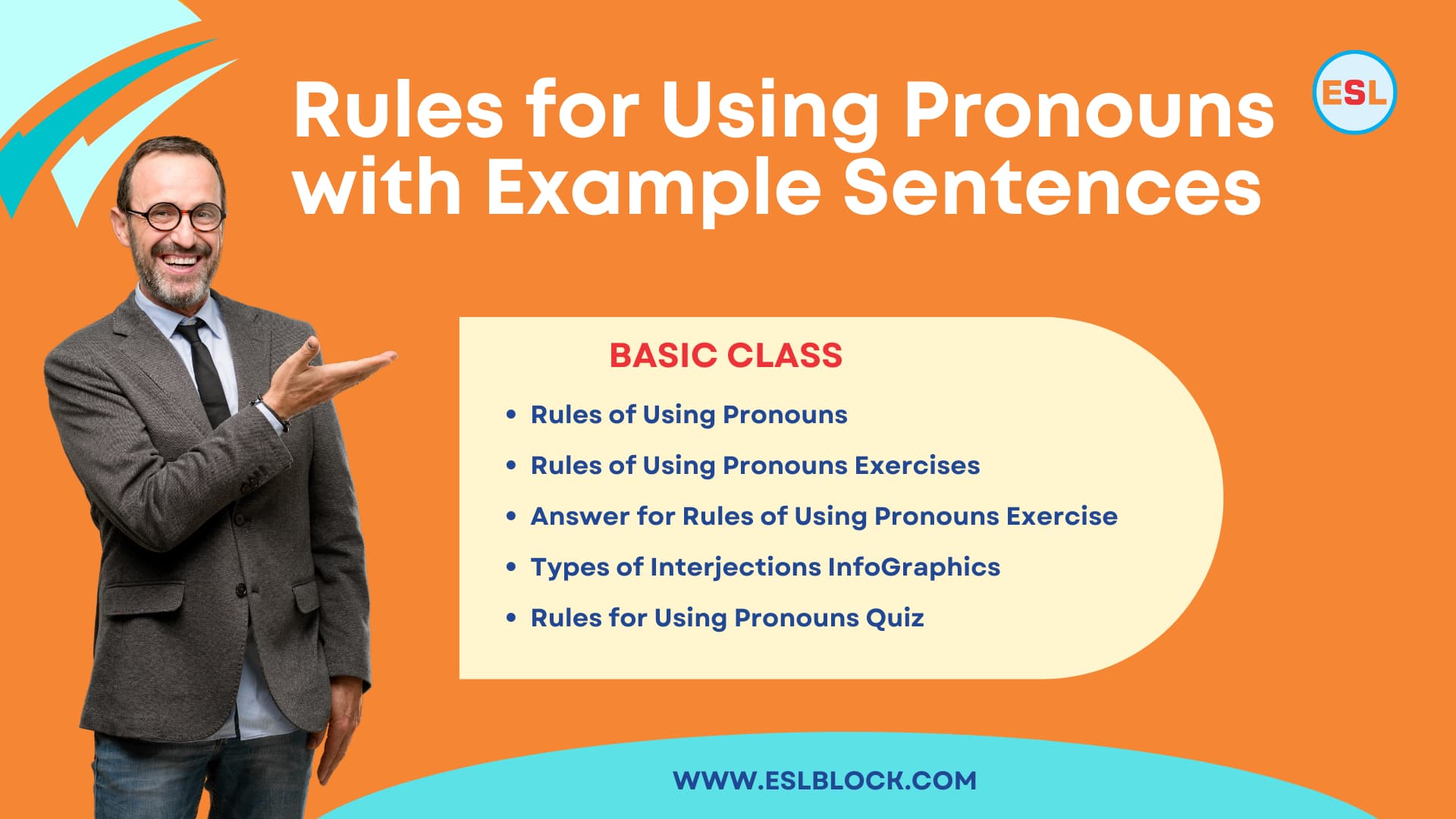 In this article, I am going to explain What are the Rules for Using Pronouns with Example Sentences? A pronoun is one of the nine parts of speech. The other eight are interjections, nouns, verbs, adjectives, articles, conjunctions, prepositions and adverbs. Pronouns are short words that are used to replace a noun or a noun phrase. You may perform a pronouns quiz for more understanding.

Also read: What is an Interjection of Parts of Speech in English Grammar?

There are three fundamental types of pronouns, subject (for example, he); object (him); or possessive (his). Here are ten easy rules for using pronouns to guide you avoid mistakes with English pronouns.

Pronouns for the subject are used in situations where the pronoun is the main subject in the phrase. Subject pronouns can be remembered quickly by filling in the blank space in a simple sentence.

Subject pronoun is also used if it renames the subject. It will follow to be verbs, like is, am, are, was, were, will be, had been, etc.

This rule can shock those concentrating on language: when someone refers to the personal pronoun ( I, you, he, she, we, they), it is taken as the verb that agrees with the pronoun.

The singular pronouns ( I, he, she, everybody, everyone, nobody, anyone, somebody, someone, no one, either, neither, each, etc.) require singular verbs. This rule is often ignored when using pronouns each, neither, or either. These three pronouns are always singular verbs.

To determine whether to use the pronoun subject or object following the words than or as, mentally complete the sentence.

The only instance where it’s contains an apostrophe when it’s a contraction for it is and it has. The only way the word who’s apostrophe occurs when it is referring to the person who has. There is no apostrophe within oneself. Beware of “one’s self,” a frequent mistake.

Reflexive pronouns are used in the sentence when both the subject and the object of a verb are the same thing or person.

If a pronoun is connected with a noun by and, mentally remove the and + noun to avoid problems.

These exercises will help you understand the rules for using pronouns. To complete each sentence, choose the best answer.

You can read the above sample sentences about Rules for Using Pronouns with Example Sentences to improve your understanding of English grammar.

With ESLBLOCK, you will not face problems studying new ideas. If you are in doubt, about the qualities of blog posts about rules for using pronouns, reach us through our blog’s comment section. Keep checking back! We’ll attempt to give you feedback as early as possible. Thank you!