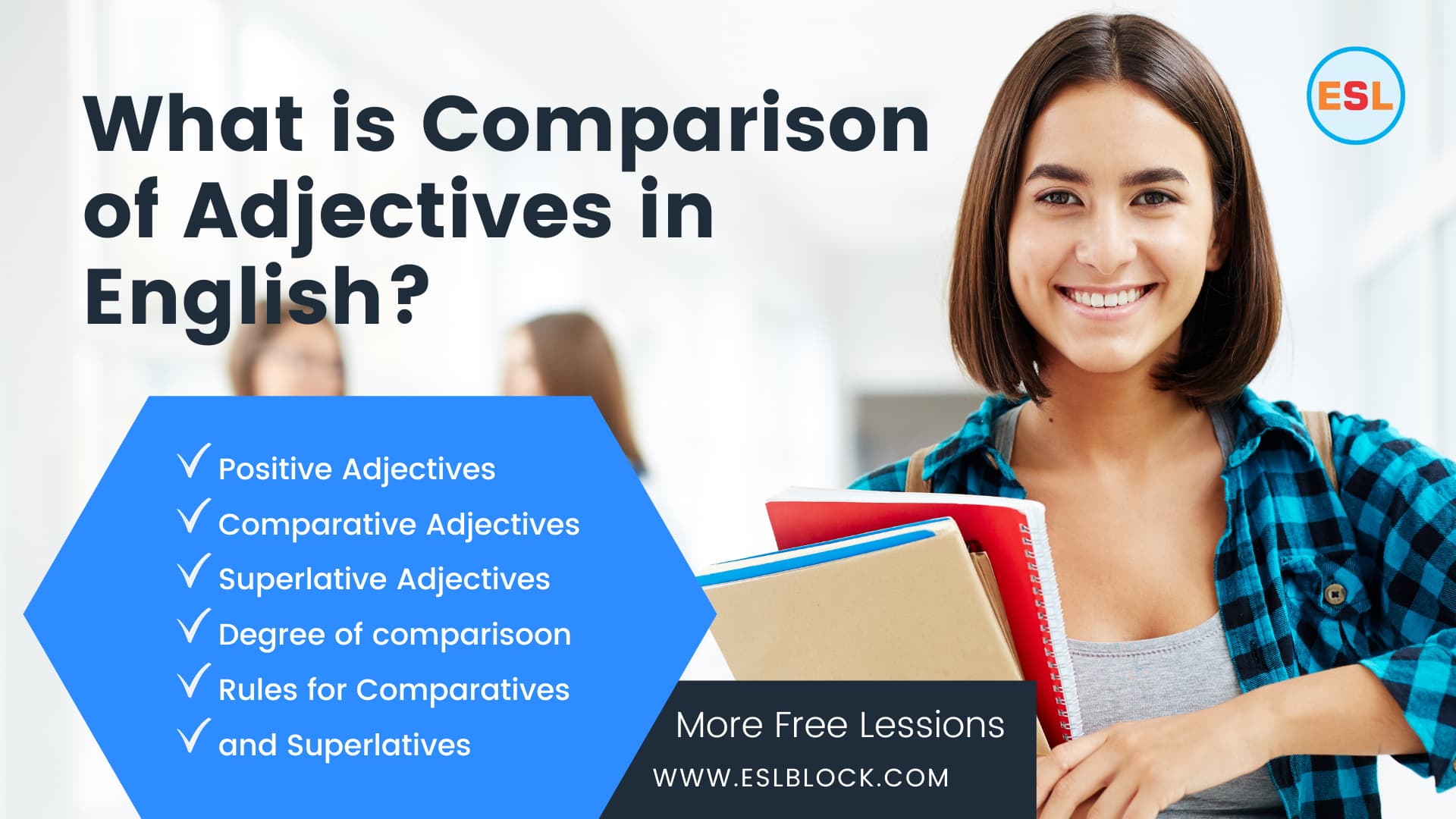 Learn to use superlative and comparative adjectives in English with example sentences and ESLBLOCK worksheets for printing.

What is Comparison of Adjectives?

There are many different languages in which many adjectives are comparable. A baby, for example, might be “beautiful”; however, another baby could consider itself to be “more beautiful” while another baby could have the glory of being the “most beautiful” of three. The term “more” in this context modifies an adjective like “beautiful” to signify a comparison is being made, and “most” alters the adjective to mean absolute comparability (Superlative).

Types of Comparison of Adjectives?

There are three types of comparison of adjectives. When students need to make sense of their thoughts and draw a comparison line between two or more things, it is useful to provide several examples of superlative and comparative adjectives for children. Superlatives and comparatives are frequently used in writing to enhance language.

It is an ordinary form of adjectives.

The term “comparative adjective” can compare one noun with another. In these situations, it is only two things that are being compared. For example, someone could claim that “the blue bird seems to be more angrier than the bird called the robin.”

The superlative adjective uses them to describe three or more nouns. They also serve to compare an item against the rest of an entire group. Superlative adjectives show a greater quality of comparison between different entities. Article “the” is used before 3rd form of adjectives. For example, “She is he prettiest princess of all the country.”

Degrees of Comparison of Adjectives

It’s a good idea to share the concept of degrees of comparison with students. In the above examples, it is evident that there is a range in comparison among smart, smarter, and smartest.

Don’t forget that you can compare two or more things using more and most. For example, “Zoey is more active than Sebastian” provides a lower degree of comparison than “Zoey is the most active person in the entire household.”

Comparisons can also be made in opposite directions with “less” and “least.” The same rule applies in the examples below. You can compare two things using the comparative form and three things using the superlative form.

Rules for Comparatives and Superlatives

Here are some general rules for comparatives and superlatives.

There are basic rules in forming the degrees of comparison:

Since the Adjective is the main part of English reading, the importance of developing vocabulary cannot be undervalued without Comparison of Adjectives.

You can read the above simple list of Comparison of Adjectives to improve your understanding of English grammar.

If you’re having any doubts about the qualities of Comparison of Adjectives, you can leave a comment below, and we’ll attempt to give you feedback as early as possible. Thank you!