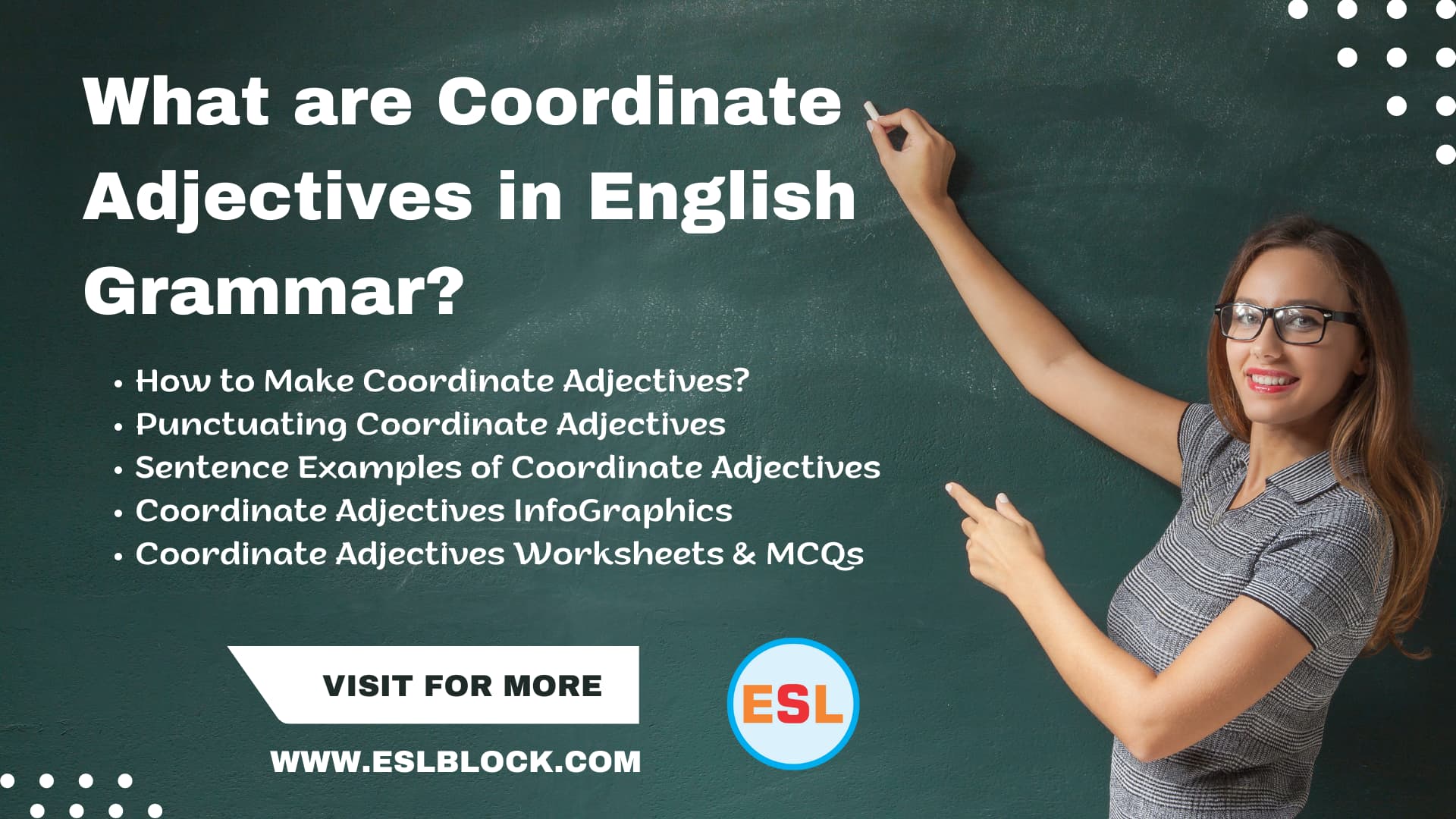 Learn to use Coordinate Adjectives in English with example sentences and ESLBLOCK worksheets for printing.

We all know that studying English is fascinating, and it becomes even more interesting when you’re mastering new concepts and applying them with zeal and enthusiasm. In this blog, you will learn about Coordinate adjectives and how to use them to the best advantage. In this class, we will be learning the meaning of the term Coordinate adjective and how it could be used to make amazing sentences.

Also read: Adjectives That Start With U

What are Coordinate Adjectives?

In general, according to the rules in English Grammar, coordinate adjectives can also be described as paired adjectives. You’d have at least two adjectives before the noun, describe the same noun, and separate them with commas. In this case, the adjectives used are the same in their usage.

How to Make Coordinate Adjectives?

You know that an adjective modifies or describes a noun. Examples of adjectives (in bold) modifying nouns (italic) in sentences include:

These adjectives tell us something about the cat, Sofia, or the quote. However, sometimes you need to describe your nouns in greater depth. If you’re describing a word using multiple adjectives, then you’ve made the concept of a coordinate adjective.

Each adjective is an individual aspect of the noun yet equally relevant to the sentence’s meaning. For example, the phrase “happy and energetic” dog is different from one who is a “happy and calm” dog. But neither “happy” nor “lively” is a more important adjective than the other.

Let’s learn about the different ways to use coordinate adjectives used in the sentence.

With this set of activities and explanations, you will quickly determine whether you are making the most effective use of the coordinate adjectives and how they could be used to describe the nouns within the sentence.

Since the Adjective is the main part of English reading, the importance of developing vocabulary cannot be undervalued without Coordinate Adjectives.

You can read the above simple list of Coordinate Adjectives to improve your understanding of English grammar.

With ESLBLOCK, you will not face problems studying new ideas. If you are in doubt about anything, reach us through our blog’s comment section. Keep checking back! If you’re having any doubts about the qualities of Coordinate Adjectives, you can leave a comment below, and we’ll attempt to give you feedback as early as possible. Thank you!